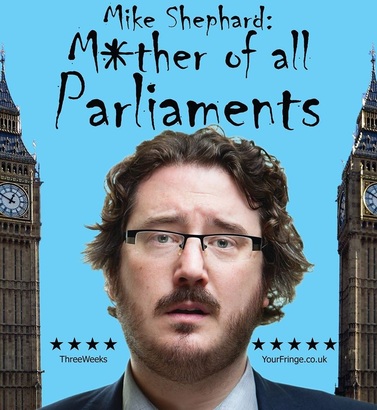 That's it, you heard right, my Edinburgh show is coming to @TheHenChickens on 23 & 24 November. History, politics, and the sad bit at the end!

Having written for BBC Radio 4, NewsRevue and the award-winning Tin Can Podcast, Mike takes on the baffling history of the Westminster parliament with wit, rage and twisted logic.

Political intrigue, medieval violence and the post-colonial implications of Babar the Elephant are all up for debate, along with his own place in the world.

History, politics and personal loss.  What more do you want?  A vote on it?

‘Shephard brings an energy and the ability to put the emphasis on the correct syllable that would make anyone laugh’ - Jeannie Jameson, Remotegoat

Mike Shephard first made a name for himself on the competition circuit having been a semi-finalist in the Amused Moose Laugh Off awards in 2012 and 2013, The Laughing Horse New Act of the Year awards in 2011 and 2012 and he also featured in the BBC New Comedy award in 2012. He has written for top comedic institutions including sketches for Radio 4 and NewsRevue.

Shephard has honed his craft by gigging at the UK’s top clubs including The Stand Glasgow, Manchester Comedy Store, The Comedy Café, Theatre Royal, Stratford, Up The Creek and The Leicester Square Theatre as well as presenting his own local Radio show.